The Secret to Homegrown Hops

The Secret to Homegrown Hops

The Midwest is known for beer and a crucial element of that beer is hops.

As the hop farming industry takes off, what do breweries need to know to get in on the growing game? Is it worth getting your hands dirty? Hops are as crucial a flavor factor in beer, as the percentage of alcohol and brewing process.  Craft breweries can boost flavor (and their locavore status) by adding their own homegrown hops. But growing your own hops is a big undertaking, especially for a small operation. If you’re considering growing hops at your brewery, here’s what you need to know.

The How-To of Growing Your Own Hops 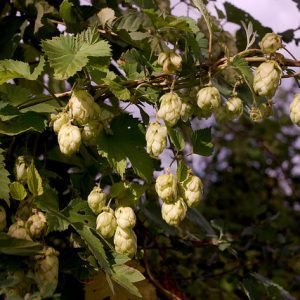 Locally-sourced ingredients aren’t just a popular choice for restaurant dishes. Brewing with homegrown hops from your state or region will boost the status and native reputation of your brewery. There’s also an appeal for brewmasters who like to control every element of their beer. Using locally-sourced hops will help you get a one-of-a-kind flavor, unique to your brewery.

That said, growing your own hops is a huge undertaking and requires a large, upfront investment, depending on your goals. Small batch runs and specialty “brewmaster’s choice” barrels are a good place to start, especially if your growing space is at a premium.

Brewing a barrel of IPA requires roughly ten pounds of hops, for a 20-barrel run, you’re going to need 200 pounds of homegrown hops. That may not sound like a huge amount but consider that 800 pounds of hops require about an acre of growing space. You’re looking at a large up-front investment of between $10,000 to $12,000 for a single acre of crops.

Hops were native to the Midwest, in fact, Wisconsin used to be one of the largest hop growers in the world. Pre-prohibition, Wisconsin produced a fifth of the world’s hops along with farms in Michigan, Minnesota, Illinois and Indiana. After the hop-killing spread of downy mildew disease, production moved mainly to the West Coast and elsewhere. Now with the availability of fungicides and other precautions hop growing in the Midwest is seeing a resurgence.

The popularity of beer in the Midwest is no secret. With breweries, restaurants and beer gardens cropping up, it’s no wonder brewers are looking to source hops from their neighbors or grow them in their own backyard.

Yes, just like everything else in the history of civilization, hops can be ordered off the Internet. Websites like Freshops  and Hops Direct offer a variety of hops at different stages of development. Most brewers start out with hop extract or hop pellets, but soon move onto whole hops to get a true taste of experimentation in their drinks. But let’s admit there’s something appealing, even sexier about growing or locally sourcing your very own hop harvest.

If you’re still not daunted by the expense and labor-intensive process of home growing hops, here’s the basics.

Planting and Caring for The Hop Plant

Homegrown hops start with a rhizome rather than a seed. The hop cone comes from the female hop plant and contain lupulin—the bitter powder found on the hairs of the cone that give beer it’s characteristic flavor. The rhizome is a piece of root from a larger female hop plant. These little hop starters are typically sold in the spring and many hop merchants have them available for pre-order as early as February.

For an acre of hops, you’ll need roughly 1,000 plants with 3-5 foot spacing. Hop plants are climbers and a hop plant can grow more than two feet in a week until it enters the flowering stage. A mature hop vine can grow well-over 20 feet long and may tip the scale at over 20 pounds. Hop vines, called bines, will require poles for climbing at approximately one 6” in diameter, cemented pole for every dozen plants, as well as an 18’ trellis. (A 20-22’ trellis can reduce yields, as can a 12’ trellis.) A drip irrigation system will be required to keep your hop yard hydrated.

Hop plants love sunshine and require 6-8 hours of sun per day. Sun exposure and day-length is crucial, especially in upper-Midwestern environments. Plant your hops in an area with southern exposure. Eastern or western exposure will also do but hope cones won’t be as large.

Hop plants require well-drained soil free of weeds. If you use a drip irrigation system, your plants should be given plenty of time to dry out between watering. Hop plants are subject to root rot and other hazards of overwatering. Sandy loam soils are best with a pH of 6.2-6.5. Be sure to test your soil to ensure you’re at proper pH levels. Hops fertilizer is a delicate balance. Add lime to counter a low pH or sulfur to balance a pH that’s too high. Your topography should be fairly flat but offer drainage.

Downy mildew is one of the primary threats to hop plants. Other pests include hop aphids, spider mites and Japanese beetles. Plants should be checked daily for signs of pests as they can spread very quickly and destroy your plant. It’s especially critical to check your plants following heavy rain. For mildew, a copper-based fungicide such as Cocide will help control the problem, but must be applied every 7-10 days, season long after spikes in disease emerge. The introduction of beneficial insects such as ladybugs will assist with aphid and mite control for organic hop growers.

Because you’re growing an edible (or drinkable) plant, it’s important to remember any chemical changes in your soil or treatment of the plant will affect the final product. Nitrogen in fertilizer may affect the acid content of the hop cones. Higher alpha acid in hop cones will result in more bitterness, changing the taste and final outcome of your brew.

Like many crops, hops obey the adage, “year one it sleeps, year two it creeps and year three it leaps.” First year hops won’t produce a high yield or grow quickly. As your hop field is getting established you may need to assist the bine by stretching and winding them around the trellis. Point any buds upward, to help them grow and flower.

Flowering of your hop plants will depend on the number of nodes, day-length and variety. Depending on your location and exposure, you should see flowering in early-to-mid fall. Once the bine flowers, the hop cones will start to form. Initially the cones will be green and damp. When squeezed they will have a lot of give and stay squished. The cones are ready when they feel dry to the touch.

As the hop cones dry out and ripen, they produce a yellow powder called lupulin. These are glands within the hop cone that produce the hop acids and oils. This is what gives beer the “hoppy” taste we love. As you touch the hop cones, you’ll notice the lupulin powder feels sticky and leaves a yellow stain. They will also give off the familiar hoppy smell. This indicates it’s time to harvest.

Once your homegrown hop cones are harvested it’s time for drying hops. Hop drying systems, called oast houses, are critical, but they can also get very complicated. The best method is dehydration which can take several hours per batch. Creating a dehumidifying box or tent, will allow you to dry your hops in larger batches and prevent spoilage. Dried hops will feel like paper and be easily pealed from the stem. Once the hops are dried they are pressed into bales or processed into pellets for brewing.

Your first-year hops will be your guide for aroma and flavor as you discover their alpha acid content (which produces the familiar bitter flavor). Depending on your happiness with the flavor, you may need to adjust your growing conditions and strain to suite your desired outcome.

Homegrown hops truly don’t come into their own until the second or third year they’ve been planted in the same location and you’ll see a larger harvest the second year. Care and time should be taken to prune the first shoots that come out of the ground the second year and the next set of shoots will be stronger for it. Select a few main bines and prune the rest. All the flavors will concentrate in the bines you’ve selected.

So, if growing your own hops seems like a larger endeavor than you’re ready to take on, don’t fear—you can still gain local status by accessing hops from cooperatives and local growers. Groups like the Wisconsin Hop Exchange, offer brewmasters the chance support farms and keep money in the regional economy.

This solution is perfect for the restaurant owner or brewmaster who isn’t ready for the expense and labor involved in running your own hop farm. Michigan State University and other institutions offer plenty of resources for hop-heads in the Great Lakes Region who are interested in learning more about beer agriculture.

Your local farmers can provide access to homegrown hops and give you all the advantages without devoting too much space to the idea. They may even be willing to work with you on the strain and soil adjustments to result in the right alpha acid for your beer. For small restaurant and brewery owners this is a perfection option to give you the best of both worlds.

So, if you’re ready to start brewing with homegrown flavor, it’s time to add local hops to your brewing repertoire.