Pumpkin Ale: A Festive and Delicious Beer for Fall

Pumpkin Ale: A Festive and Delicious Beer for Fall

With the autumn upon us, now is the time for breweries to showcase their seasonal beers like the one-of-a-kind pumpkin ale!

First introduced in the 18th century, the American-born pumpkin ale has been a crowd pleaser for many years. Craft beer drinkers appreciate the flavors of this festive autumnal brew, packed with different spices. Pumpkin ale offers a variety of flavor interpretations from hints of pumpkin pie to Thanksgiving-in-a-bottle. This unique profile makes this beer a beloved and festive seasonal beverage.

Pumpkin ale is a specialty seasonal beer predominantly available from the August to November. The flavors of crisp fall months are captured with harvest spices such as nutmeg, ginger, and cinnamon giving this beer its recognizable, delicious taste.

Originally brewed by some of America’s earliest pioneers and brewmasters, pumpkin ale has a rich history. George Washington and Benjamin Franklin were known for their beer making abilities and pumpkin ale recipes. It’s evident this beverage is an American classic and a full of tradition.

Not only is pumpkin ale a refreshing autumn beverage but it’s also a great ingredient for preparing and cooking up fun desserts. From grown-up pumpkin ale floats to beer ice cream and spiced beer bread infused with pumpkin ale, the choices are endless with the diverse pumpkin ale. This American staple has been around for hundreds of years getting people excited for upcoming holidays like Halloween and Thanksgiving!

What Is Pumpkin Ale?

Pumpkin ale is a malt type beer often brewed with real roasted pumpkin and spices in addition to the standard yeast. The ingredients that go into creating the pumpkin ale’s distinct taste expand beyond just pumpkin. Pumpkin ale evokes a flavor reminiscent of pumpkin pie, so mashed up pumpkin alone isn’t enough to achieve the desired flavors. Holiday spices like cloves, allspice, and brown sugar as well as ingredients such as molasses, caramel, and even sweet potatoes are often used to produce pumpkin ale.

These seasonally spiced beers range from 4.0 to 9.0 ABV and tend to have an earthy, sometimes sweet taste. An authentic pumpkin ale is often brewed, cooked, or roasted pumpkin. An unusual beer ingredient, the cooked pumpkin is usually placed into a separate bag during the brewing process, so machinery isn’t negatively impacted or backed up. The pumpkin flavors are infused into the mixture, combined with spices and yeast, creating traditional pumpkin ale.

Today, many breweries put their own twist on the standard pumpkin ale recipe with fruit accents such as cherries, oranges, and apples. These craft beers are often bottled and only available for a few months during the autumn. The pumpkin ale and all the variations are the perfect fall beer selection. A few well-known and tasty pumpkin ales include Samuel Adams’ Harvest Pumpkin Ale, Blue Moon’s Harvest Pumpkin Ale and Carolina Beer Company’s Cottonwood Pumpkin Spiced Ale.

The History Behind Pumpkin Beer

Recognized today as an American favorite, pumpkin ale originated long ago in the New England area. Pumpkin and squash were native to the United States. Early American settlers found pumpkin growing wild everywhere and because of this, it was very cheap to supply. When there was no barley to brew beer or a shortage of other essentials, pumpkin was often used as a replacement base for the beer. At the time, this was a utilitarian decision. Pumpkin flavor was not as festive or beloved as it is today.

Cindy Ott, author of Pumpkin: The Curious History of an American Icon says it’s important to know pumpkin wasn’t a desired ingredient and didn’t carry the same sentimental value it does today. Pumpkins today are associated with family and American tradition but back then, these squash plants were all over the place and not at all special. They were simply a cheap base for brewing.

The original pumpkin ale was brewed by Buffalo Bill’s in Hayward California. Largely influenced by George Washington’s original recipe, Bill Owens’ pumpkin ale is still popular today. Owens started brewing the beer in 1983 and after several failed attempts, Owens recognized that pumpkin alone was not enough to achieve the festive flavor he was seeking. As the first brewery owner to add spices to his recipe, Owens successfully created a beverage to taste exactly like a delicious slice of pumpkin pie. His pumpkin ale was the first-ever sellable pumpkin beer to hit the market, quickly turning the craft brewery world upside down.

Over the next few decades, Americans began looking at pumpkins differently. Soon the flavors of pumpkin spice were associated with all-things-autumn. Pumpkin ale quickly became a traditional fall staple. Today, Buffalo Bill’s is the oldest brewpub still standing and operating in the United States and pumpkin ale is still a fall favorite on every beer menu as the seasons change.

Why You Should Brew Pumpkin Ale Today! 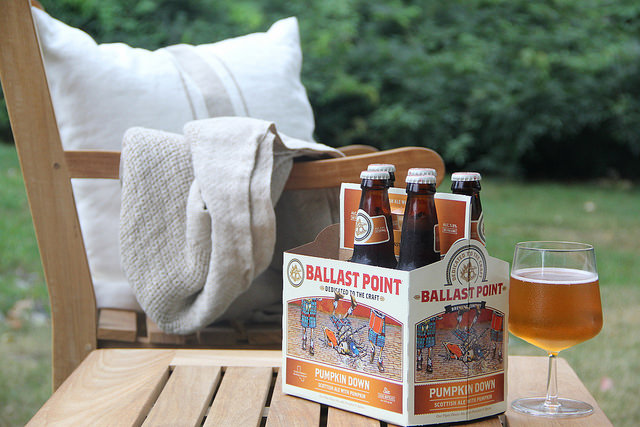 Julia Herz, Craft Beer Program Director for the Brewers Association points out that every other retailer and store adjusts what they sell and how they sell to their customers based on the season (think Starbucks and the infamous Pumpkin Spice latte). When autumn arrives fall coats, cozy sweaters, and blankets hit retailers’ display windows to meet the wants and needs of customers. Brewery owners should do the same and adjust their menu to offer patrons a specialty beer inspired by the autumn season. Additionally, Herz also says, “Google searches for “pumpkin beer” spike every year from late summer through the fall, exceeding searches for all other seasonal beer terms combined.”

Pumpkin is a big deal to Americans and breweries need to ensure they’re giving their beer loving fans what they want, when they want it. Timing is everything with the pumpkin ale. When thoughts turn toward candy corn and costumes for the kids, adults will be in the mood for a spicy, comforting glass of pumpkin ale.

Microbreweries often consider flavored beers such as a summer wheat, wild fermented ales, or raspberry stout when the weather is warm. As it cools down and we approach the season of Oktoberfest, a pumpkin ale will be a popular addition to your brewery’s menu. Pumpkin ale pairs well with many seasonal dishes as well.

A Fun and Festive Treat for the Fall Season

The best part about pumpkin ale compared to other craft beers (in addition to the one-of-a-kind taste), is the feeling you get when you drink it. This beer captures the excitement you feel when the weather begins to change, and your local breweries offer your favorite brews again (including of course, pumpkin ale). A great pumpkin ale is special because you can’t get the brew any other time of the year; it’s a unique beverage reminding you of the wonderful season you’re in.

Fall traditions are plenty, from apple picking to haunted house visits and caramel apple decorating parties. Pumpkin ale, first introduced by our founding fathers, is a classic and a beloved beer tradition by all. Remember, every brewery can create their own version of a pumpkin ale—with a unique blend of spices and flavors, pumpkin ale is open to interpretation by every brew master. Pumpkin beer is an original brew.

Pumpkin ale is as American as a slice of pumpkin pie. The distinct spices and pumpkin combine to create a recognizable flavor everyone craves during the fall season. If your brewery hasn’t hopped on the pumpkin ale trend yet, now’s the time! Make it your own and join the great American tradition of brewing delicious pumpkin ales.