The Science Behind Barrel-Aged Beer is Brewing Magic 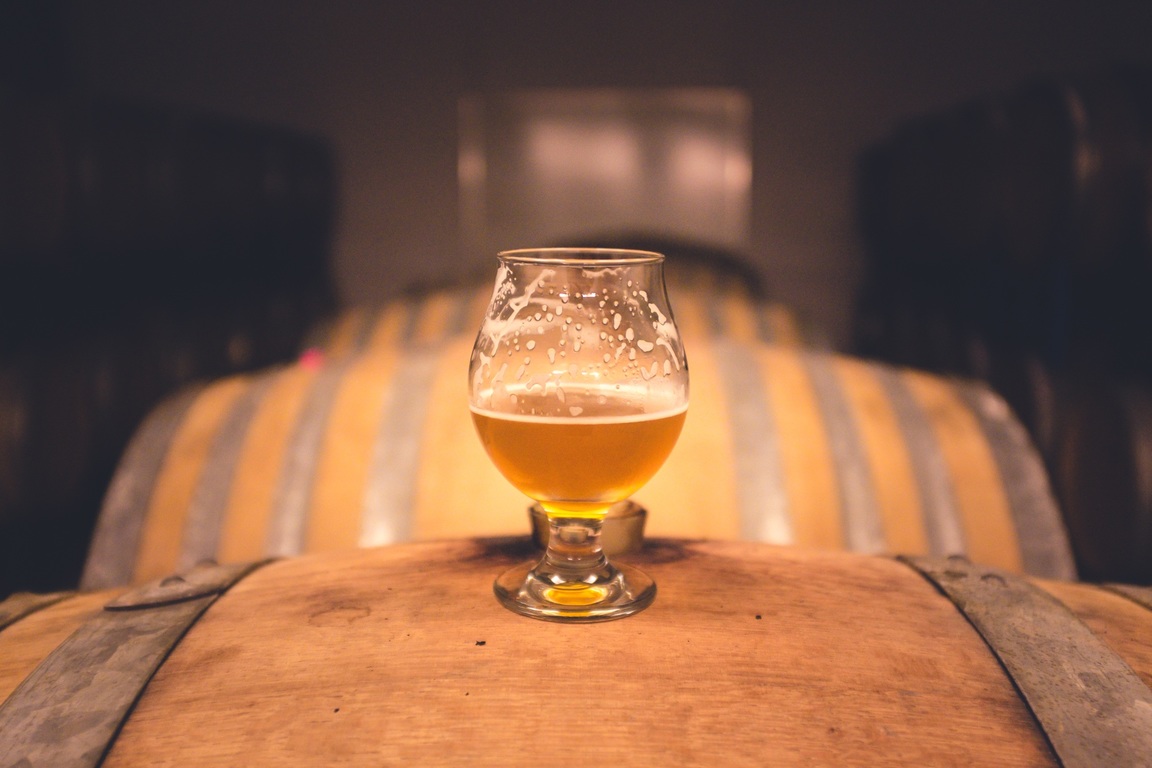 The Science Behind Barrel-Aged Beer is Brewing Magic

Barrel-aged beer. Is there any other combination of words better than this?

For many beer lovers, the answer is a definitive NO! Today, we’re breaking down the science behind beer aged in barrels and how barrel-aged beer is the (near) magical result of a scientific process we still don’t fully understand. From brewers to beer lovers (especially craft), barrel aged beer is something special. It’s become relatively common to see breweries offering limited-release barrel aged editions of their brews, be it flagship, one-off, or collaborative.

Frequently greeted with great enthusiasm from their fans whilst selling out within minutes (in some cases) and of course, accompanied by some hefty price tags for even a single bottle, barrel-aged beer is a subject of excitement, creativity, and experimentation.

It all comes down to science…and a bit of magic.

What actually happens inside of a barrel is a fascinating scientific process. In essence, chemistry and a touch of physics interact with alcohol at a molecular level. It’s a beautiful exchange of give and take, and yet, somehow, this process is not yet fully understood.

One thing we know for certain, though, is that when storing a liquid—especially alcohol—within the confines of an oak barrel, it nearly always gets better.

The History of Barrel-Aged Beer

The logistics of transporting products from one location to another are about as old as human culture itself; at least as old as civilization.

To sum it up in a few words, barrels became the ideal container for transporting goods. Barrels are relatively easy to manufacture, can store large quantities of goods, are easy to move (thanks to the simple fact that they roll), are easy to stack and store in a cargo hold, and are waterproof (though not oxygen proof…more on this later).

With all of the solutions and benefits barrels provide to solving Old World shipping woes, there was even more oak barrels had to give.

Until fairly recently, trade occurred in one of two ways—by land and by sea. Though travel by sea was often much faster than over land, these journeys still took a long time. During long voyages, these storage and transport barrels experienced what is often referred to as “resting time.”

In particular, the time alcohol spends sitting in a barrel enables the chemical and physical interaction between wood and alcohol to take place. It didn’t take long for people to discover that there was a very distinct difference between alcohol before and after a journey at sea.

Take the IPA style of beer for example—a beer named after the long voyage in which it was discovered. The English pale ale has long been a popular style of beer, but it didn’t last long enough to survive the journey between England and India. The beer simply didn’t have enough alcohol in it to activate the barrels’ scientific magic properly.

Then, brewers added more hops and malt to increase the ABV of the pale ale they were sending to India. This increase in ABV not only acted as a preservative (the original intent) but also assisted in the activation of the wooden barrels.

The IPA style of beer is an excellent example of the relationship between alcohol, beer, and the basic requirements needed to make barrel-aged beer.

Why Use Oak Barrels?

Why not maple wood? Or cherry or chestnut? Because science. Tree anatomy, to be precise.

A cooper is a barrel maker. The skilled trade of making barrels is cooperage. While it would seem logical that the wood from a fruit tree like cherry, pear, or apple would make an excellent barrel for aging beer, wine, or spirits, it isn’t that simple.

Oakwood makes the perfect barrel because of its anatomy. Oak trees grow in a specific way that we call “ring-porous.” A ring-porous tree has vessels, which are located in the outer rings of the tree, or in the tree’s new growth rings, that carry water up to its trunk.

As an oak tree grows and ages, the older water vessels (located in the now old rings), become filled and plugged up with a chemical compound called tyloses.

Tyloses forms a crystalline molecular structure that not only clogs the older water vessels in a tree but is a part of what also gives the oak it’s signature hardness. The tyloses-filled center of a mature oak tree is known as the heartwood.

Heartwood is perfect for barrel-making because it doesn’t conduct water. Therefore, coopers use oak wood to craft water-tight barrels—an ideal and highly desirable trait for any shipping storage container.

While there are hundreds of species of oak, only a few are suitable for and used in barrel making. Most popular of these are the European oak, Quercus Robur, and American white oak barrels made from the American white oak tree, or Quercus Alba.

And so, with a few specific species of oak, the cooper is able to craft the perfect storage container.

Dr. Jim Swan, a master of whiskey maturation, identified key components of oak. These chemical compounds change throughout the process of barrel making, creating different elements for the spirits to extract during maturation, thus changing the flavor profile.

However, it’s not simply nature alone that allows us to make the barrel-aged beers we love so much. The process of crafting a barrel also plays an intensely significant role in how a beer rested in a barrel will taste.

Oaktree biology and anatomy are only one part of the process that makes oak barrel-aged beer so amazing. The barrel itself is another key aspect.

In particular, this involves:

In step one, freshly cut wooden staves must be dried before a cooper can work with them. Drying the wood removes excess water while concentrating the many desirable flavor molecules.

With step two, the newly crafted barrel is baked, which helps to make the wood more pliable while holding its form. The layer of charcoal created inside the barrel is not just desirable by craft beer, wine, and spirit drinkers, but also creates watertight seals—great for storing alcohol!

The next two steps in the process require an in-depth look.

Now that we understand the foundational science and concepts about oak tree wood and expertly crafted barrels, it’s time to look at the actual process (yes, chemistry).

Changes in weather, temperature, atmosphere, and pressure cause wood to expand and contract. This expansion and contraction are referred to as “breathing.”

When the wooden staves of a barrel breath, alcohol is drawn into the wood itself. This is where a variety of flavors are imparted into the alcohol. Additionally, there are other less desirable qualities and flavors that are also filtered out, often referred to as “maturing,” “mellowing,” or “smoothing” the harsher qualities of alcohol.

Oak, being a porous wood, also allows oxygen to enter the barrel through the staves (despite being watertight). With this, both evaporation and oxidation occur, further impacting the alcohol within the barrel. As some of the alcohol evaporates out of the barrel, there is more room for oxygen inside, and through oxidation, the flavors are further changed.

Time is critical to the barrel-aged beer process. However, the same conditions that cause wood to breathe are also directly related to how long alcohol must remain in a barrel in order to mature.

On the molecular scale, alcohol molecules pass through the charcoal layer (created by the charring process) and into the wood, where tannins, sugars, and aromatics are imbued. The wood breathes the alcohol in and out, repeatedly over time.

Barrels stored in warmer climates age much faster than those stored in colder climates. This is because (*science*) heat speeds up chemical reactions. It also creates a larger pressure differential inside of the barrel which forces the liquid deeper into the wood, extracting more flavor.

During the winter, this chemistry essentially stops. This is why it takes longer for a barrel-aged beer to mature in England than in Mexico. For example, the former Maker’s Mark distiller, Dave Pickerell once swapped barrels with a Scotch distiller. After regular samplings, he concluded that one year of aging in Kentucky was equivalent to 3-4 years of aging in Scotland.

So, Why is Barrel-Aged Beer So Special?

In most cases, beer is usually aged in a barrel that has previously housed spirits or wine. When it comes to alcohol barrel aging, beer is frequently the second or third tenant, not the first.

Alcohol doesn’t simply leech out all the goodness of an oak barrel without leaving something behind. The barrel’s wooden staves absorb various qualities and flavors of the alcohol resting within. When beer is aged in a barrel that previously housed a wine or spirit, the beer will take on characteristics of the former resident(s), which includes absorbing a higher alcohol content. A beer may enter a barrel at 4.8% ABV, but exit well above 10% or more.

Today, we can easily find beer aged in whiskey barrels, but brewers often experiment with all types of spirit and wine barrels. These beers are often one-time offerings that are unique, incredibly complex, and when they’re gone…well, that’s it.

Breweries tend to gleefully experiment with aging their various beers inside of barrels, resulting in things such as gin barrel-aged IPAs and Sherry cask aged porters. Brewer masters even blend their beers as any master distiller would, creating combinations based on barrel-aged beer percentage blends, such as 63% port, 21% gin and 6% sauvignon blanc.

The science of barrel-aged beer paired with the creativity of brewers is brewing magic, truly.

So that’s all there is to it? Just throw some beer into a white American oak barrel, wait a few years, and then reap the magnificent rewards? Not quite.

There’s another element here that lends itself to the magic of barrel-aged beer mad science—the unknown.

We definitely understand much of the process of barrel aging, how it works and what’s going on inside of the barrel. But not everything. There’s still the underlying element of unpredictability—a quirky bit of reality that masters of the alcohol craft and scientists are unable to explain.

Two barrels—filled with the same beer and aged for the same amount of time—could produce two very different results. Sometimes the results are mind-blowingly excellent, while at other times, a complete failure.

And we don’t know why.

Though it’s not good science to explain away the unknown as “magical,” it can safely be said that whatever is happening inside of the barrel, the results are often delightful. This is why barrel-aged beer is magic.

Visit our blog for more craft beer brewing history, beer brewing science, and ideas on how to promote your brewery!