The Season for Pale Ale Beer: Why Saison is The Perfect Summer Beer

The Season for Pale Ale Beer: Why Saison is The Perfect Summer Beer

Now that summer is upon us, take a deeper look at how these tasty pale ale beers can brighten up your brewery.

With spring freshly finished and summer still full of hot, thirsty days, many breweries are rolling out their saison beers. These light, effervescent beers are excellent refreshments on hot days as the temperature climbs. The key to this unique pale ale beer treat is the saison yeast and the creative additions combined with the brew. Saison beers are often where brewmasters experiment with unique tastes and ingredients creating fruited beers and chocolate ales. Customers want something light and fun during the summer; saison beer is exactly that.

What is a Saison Beer?

The modern saison is a pale ale beer known for its high carbonation and refreshing taste. Spices and fruit accents such as citrus and other non-traditional components are often mixed in with the yeast during the brewing process, giving these craft beers a one-of-a-kind flavor. Saisons are bottle conditioned, farmhouse style beers that come to their carbonation through additional yeast in the bottle. They’re best known for their unusual and playful elements, making it the perfect summer beer. 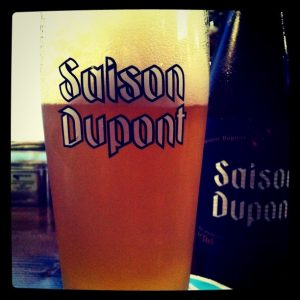 These modern beers range from 5.0 to 8.0 ABV, averaging at 7.0. They rate an 8 on the SRM color scale, (similar to a good Weissbeir). These beers are made with yeast that handles high temperatures well, working best between 68 degrees and 85 degrees Fahrenheit. Saison Dupont has an IBU rating of 28; a good starting point for the bitterness of your brew since most breweries using the name aim to model Saison Dupont.

A History of Saisons

Traditional saisons originated in Wallonia, the French-speaking region of Belgium. ‘Saison’ is French for ‘season.’ The name stuck because the pale ale beer was initially made by farmers during the cooler months, when they weren’t as focused on planting and harvesting.

Brewing during the cold season also meant a lower chance of the fermentation going bad–before refrigeration, brewing conditions were only perfect for certain months. Farmhands would brew the pale ale during the cool winter and enjoy it throughout the summer. The traditional farmhouse pale ale beer was produced with a lower alcohol content, as it was meant to be consumed on the job as a refreshment in the hot summer sun.

These days, saisons are also sometimes known as farmhouse ales–a branding tactic to appeal to those who may be put off by a French beer name.  The farmhouse ale label is also a way to differentiate the modern version with higher alcohol content from the lighter, traditional brew, which still has fans in Europe.

A few years ago, saisons trended on the craft brewery scene thanks to the success of Dupont Brewery. Their Saison Dupont Vieille Provision received several accolades within the American market, with Men’s Health magazine calling it “the world’s best beer” in July of 2005.

Saison craft beers offer an excellent opportunity for breweries to experiment with different tastes and ingredients. A delicious small batch could lead to more unique versions of this classic brew. Successful combinations might even evolve into your next perennial brew. Customers will return over many summers for a saison beer that tastes just right.

What’s Happening in the World of Saison?

This seems to be the summer of the saison, even the New York Times thinks so. Thanks to the recent craft brew explosion, more and more people are looking to expand their horizons when bellying up to the bar. Putting a saison on your menu is a good test run to see how interested your customers are in trying different things. This pale ale beer especially enjoyable when properly paired with a summer food menu, should your establishment serve both. Talk to your chef and see if they have any ideas about crafting a paired special for the summer that could make your brewpub the talk of the town.

You’re able to literally spice up a saison by adding peppercorns and coriander. The success of the pumpkin spice saison in fall expanded palates around the world in a big way. Thanks to the craft brewing scene, ginger beer has made the leap from a non-alcoholic choice to a beer option. Mixing the warmth of ginger and a good beer is a satisfying drink for any season.

Although saison beers contain a traditional mix of fruits in their recipe, take a trip to your local world market to choose new fruits those farmers from Flanders would have never dreamed of mixing in. If there’s a favorite tropical fruit that you rarely see used in brewing, try it out in a saison beer to see how it fares.

The seasonal nature of this beer leaves it open for use as a platform to bring in all sorts of strange and interesting ingredients together. Although it’s less sweet than classic ciders or fruited beers, there’s still a refreshing summer kick. For brewing, fruits and spices are the traditional choices, but so many other things can be added to generate buzz for your brewery. Find a local business that produces something edible and speak with them about a cross-promotion opportunity, featuring their product in the mix for a saison pale ale beer. The ingredient could be something exotic. Butterfly beer, anyone?

This is the time of year to broaden your horizons and experiment with something new. Your brewery or restaurant is no different. Saisons allow you to stretch your legs as a brewmaster and get people to notice your creativity. If you think you have a recipe that could work, consider renting a commercial water heater to help increase your manufacturing volume.

If you come up with an excellent new craft beer, don’t forget to raise a glass to those Flanders farmers from so many years ago.