The Microbiology Behind Sour Beer

The Microbiology Behind Sour Beer

Discover how the microbiology behind sour beer works to create the multi-faceted flavors brewers and beer drinkers love!

Sour beer is all about its complexity. Sour beer drinkers tend to be enamored by the complex intermingling of flavor, aroma, sensation, and even the visual appeal sour beer can offer. This incredible beer style owes its complexity to tiny microorganisms—bacteria and yeast.

Microorganisms are the reason we have beer in the first place. Without Saccharomyces yeast gobbling up the sugars in your wort and producing alcohol… well then, there’s no beer. We all know this as fermentation, and it is perhaps one of humanity’s greatest discoveries—gastronomically, socially, economically and psychologically speaking, anyway.

Today, both brewers and scientists have unlocked much of the mystery surrounding the souring of beer, having turned it into more than just a methodical process, but into an artful craft as well. By studying the microorganisms that both ferment and sour beer, scientists now understand the biochemistry that brewers have harnessed for hundreds of years.

It turns out this process is fascinating!

One of the most compelling aspects of sour beer is the microbiology behind sour beer. The bacteria and yeast involved in souring a beer contribute many key features that define the various sour beer styles we know and love today. In short, for as much as we’ve learned about the scientific processes driving the microfauna involved in sour beer, there’s still plenty we simply don’t know. Brewers are constantly experimenting with sour beer microbiology.

Bacteria and yeast: both microbes, yet distinct organisms. Bacteria are single-celled organisms, while yeast is a unicellular type of fungus.

Though fungus is similar to plants, they have no chloroplasts to convert solar energy into sugar. Fungi must consume outside material for energy. In the case of brewer’s yeast (Saccharomyces), it eats sugar and produces alcohol, various esters, and phenols (and CO2).

On the other hand, bacteria are normally considered an infection in beer and is something to be avoided. However, souring bacteria such as Lactobacillus and Pediococcus are desirable for brewing sour beers, and together with Brettanomyces (a yeast), form the Big Three in the microbiology behind sour beer.

While Brettanomyces (Brett) is a different yeast genus species from Saccharomyces, it is a key ingredient in many sour beer styles. In fact, Brett is the most commonly used non-conventional brewing yeast. Generally considered a contaminate to all other non-sour beer styles, Brettanomyces can cause plenty of undesirable flavors such as horse stable, barnyard, medicinal, or leathery.

Often, words like “funky” are used when describing certain aromatics in sour beers, and Brett is usually the main culprit. Like Saccharomyces, Brett also ferments beer by turning sugars into alcohol—it just takes longer. This longer fermenting process is highly valued by sour beer brewers because of the added complexity of flavors Brett provides a beer; flavor ranging from tropical fruits, pineapple, and juicy peach, to the funkier characteristics like dirt, earth, barnyard, and sweaty horse blanket.

Brettanomyces is also responsible for producing ethyl esters, which contribute to tropical fruit flavors found in many sour beers. It’s also able to break down the cellobiose compound found in wood, making beers brewed with Brett excellent candidates for barrel-aging.

As for Brettanomyces bacterial counterparts—Lactobacillus and Pediococcus—these beer souring microbes produce lactic acid rather than acetic acid. While there are a few other species of lactic acid bacteria (LAB), these two are the main types used in brewing sour beer.

Lactobacillus and Brettanomyces are largely responsible for why hops were added to beer in the first place—to preserve and prevent ruining a brew. When used correctly, Lactobacillus is often found in many types of food fermentation, from kimchee to yogurt. It’s responsible for lowering the pH of a sour beer, creating many desirable flavor compounds and clean, sour characteristics.

Pediococcus takes its time in lowing the pH of a brew (thus increasing its acidity) and can survive in an environment where hops are present. It also produces a harsher, more intense acidity than Lactobacillus. Since hops are antimicrobial in nature, only certain species can withstand an environment with hops. Due to Pediococcus’s resilience and its slower pace, it is often combined with other alcohol-producing microbe strains, usually Brettanomyces.

The process of sour beer fermentation is called wild, mixed, or spontaneous fermentation. In essence, this means that sour beers are created due to the exposure of multiple yeasts and/or bacteria strains working together to break down the sugar-loaded wort to produce alcohol and acidity.

The term wild fermentation references the first intentionally brewed wild ales—lambics—first brewed in Belgium. Brewed in open-air tanks, lambic beer is exposed to the various microfauna floating around in the air and blown by the wind. Yeast and bacteria from fruit trees—as well as everything else in the surrounding area—drift into these open tanks, creating an uncontrolled spontaneous fermentation. This results in a sour beer that varies wildly from brew to brew.

Now, there’s a lot more that goes into creating a lambic brew than spontaneous fermentation, including barrel aging, blending, and the addition of various fruits. But the important part to note is that the local microorganisms floating into these open-air vats are what created the first intentional sour beer style.

A brew can also be soured through inoculation—an injection of specific microbial organisms. Both kettle souring and mixed culture souring are methods of inoculation for acidification.

Kettle souring takes place inside of the brew kettle, where the wort is cooled to incubation temperature and then inoculated with lactic acid-producing bacteria (LAB). This process is also fast, typically only taking between 1-2 days before a secondary boil is applied to halt the souring of the beer. Primary fermentation is then initiated.

Now that we understand the basics of how these microorganisms convert sugar into acid, let’s take a brief look at the different types of organic acids found the products we consume.

There are 4 common organic acid compounds that we categorize as a part of flavor and taste.

For sour beer, lactic acid is the ideal organic acid. Because Brettanomyces is only responsible for some of the souring of beer, it is frequently paired with a LAB to lower the pH, such as Lactobacillus and/or Pediococcus.

When Brettanomyces is paired with Lactobacillus, a clean, tangy sour beer is the result. This is commonly seen in beer styles such as goses and Berliner weisses. When Brett is paired with Pediococcus, the harsher sourness contributes to a variety of other funky aromatics as well. We commonly see this pairing in sour beers such as lambics and Flanders reds.

This Pedio funk combined with the Brett funk creates a harmony of complex flavors that are well worth taking the time to acquire a taste for. In short, Pediococcus provides Brettanomyces even more chemical compounds to work with, which is precisely why they are frequently paired together. 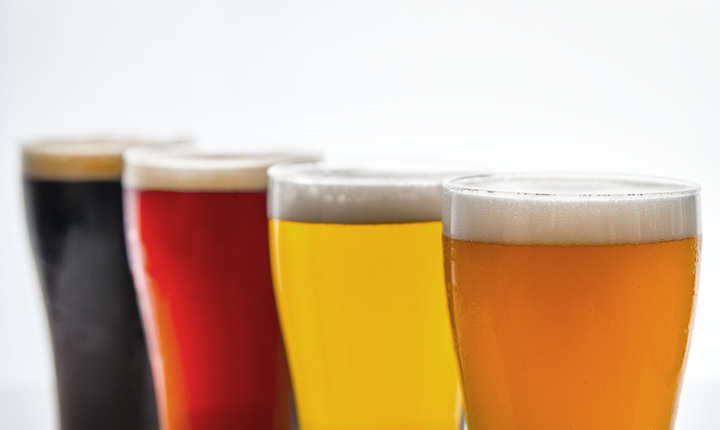 What exploration into the microbiology behind sour beer would be complete without at least mentioning the most common sour beer styles?

While this list is in no way exhaustive, it provides a solid overview of the many different sour beer styles available today.

The microbiology behind sour beer is an expansive and fascinating topic. Even today, there is still a lot to learn about the sour beer brewing process, much of it residing with unlocking the secrets of these microorganisms themselves.

What new discoveries are waiting to be revealed as both science—and brewers—delve deeper into the microscopic world?

Visit our blog for more craft beer brewing history, beer brewing science, and ideas on how to promote your brewery!